Nine athletes, coaches, and contributors will be inducted to the HOF on Sunday, February 6

The 32nd Annual Hall of Fame enshrinement dinner is Sunday, February 6, at the DoubleTree by Hilton Hotel in Charlottesville. Tickets are $35 and can be purchased online: https://gofan.co/app/events/493655.

The Hall is dedicated to preserving the rich heritage of outstanding achievements by students and adults in sports and activities within Virginia’s public high schools.

Contributors have rendered significant services in other capacities, such as administration, academic activities, officiating, media, or sports medicine.

Anthony Poindexter gets inducted into College Football Hall of Fame 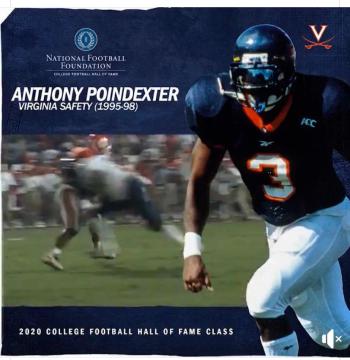 Many people in Central Virginia can recall a  dynamite little athlete that was full of energy and a buzz saw on a football field on Saturdays in youth leagues. That force of nature grew up to be a more than a buzz but a larger than life grown man, leaving many fans in awe and many opponents saying, “Oh no, not again!” Anthony Poindexter made his mark on just about every field, diamond or court that he touched growing up. A three-sport star, Poindexter earned all state honors in offense and defense as he led the Jefferson Forest Cavaliers to consecutive AA state football titles in 1993 and 1994. The tremendous success as a gridiron legend only grew larger when Poindexter matriculated to the University of Virginia and attacked, blitzed and left offenses in shreds as the hard-hitting safety for the Cavaliers during a golden era of football. Poindexter was member of the first ACC team to beat the dominant Florida State Seminoles, when he and Adrian Burnim stopped Warrick Dunn at the goal line in maybe the biggest win in Virginia history.

In his junior season, he registered a team and program high 98 tackles and team leading three interceptions.  As a senior, he was on his way to breaking that record before a season ending knee injury curtailed his season in game 7.  He still recorded 78 tackles and earned another 1st Team All-American Award.  During his illustrious career, Poindexter was the recipient of the 1997 Bill Dudley Award (best player honor given to a college football player from a college or university in Virginia) and the 1998 ACC Defensive Player of the Year.  He garnered three consecutive 1st team All-ACC awards from 1996-1998.

Poindexter was a catalyst for three teams that secured postseason bowl bids as well as sharing the ACC title in 1995. 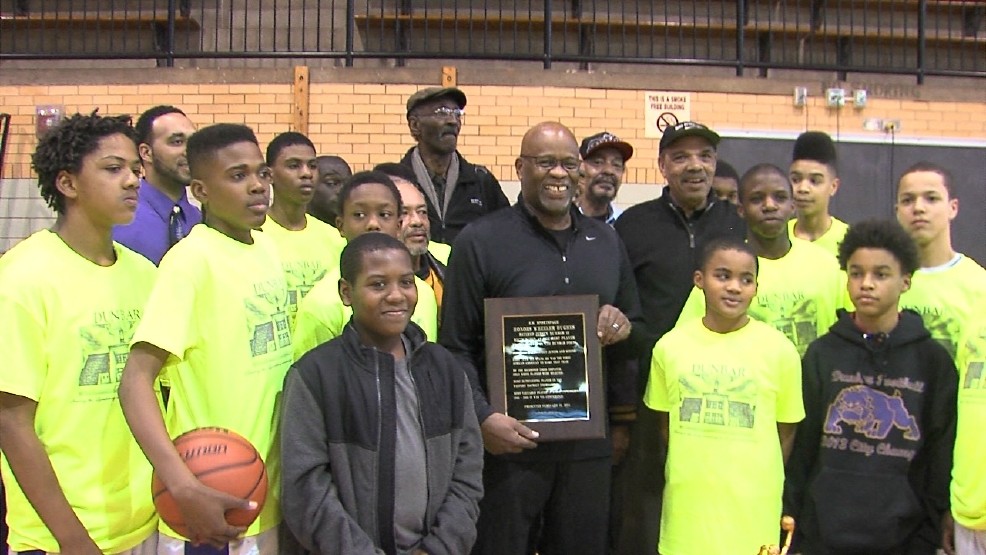 Lynchburg, VA - 66 year old Wheeler Hughes was honored in his High School where he averaged 25 points per game back in 1966At a special ceremony Monday night, his jersey was retired, and he was acknowledged as the best basketball player to walk through the doors of Dunbar High School.

Today, it's known as Dunbar Middle School. But in 1966 it was an all-black high school.

But Monday, at a Dunbar basketball game, the school honored a man who beat the odds and proved coming from the bottom can land you right at the top.

Talk about a rebound, Dunbar Middle School, has come a long way.

It's now a premiere institution for STEM education; a far cry from the segregated school it once was, years ago.

"Growing up was kind of normal although we knew there was another world out there" said Wheeler Hughes.

Hughes graduated from Dunbar High School in 1966. He came back Monday to be honored as the school's best basketball player ever. His jersey, number 12, was also retired.

In his senior year Hughes averaged nearly 30 points per game. He led his team in scoring, assists, and rebounds. He would lead them to the 1966 National High School Championship game in Montgomery, Alabama. And after graduation a scholarship landed him on the squad of Kansas State University.

"There were 40 blacks on campus in Manhattan, Kansas, with 30 of us being athletes; football and basketball and track. When I see the diversity that's here now, it just simply makes me proud" he said.

"I think that Dunbar Middle School is representative of almost like a melting pot, because we are a school for innovation now" said Kacey Crabbe, Dunbar's Principal.

Crabbe explains the school's journey from struggle to success, has been made all the more special by Hughes' story.

"He was able to have a vision that many people never ever had and never could have at that point in time. So he really led the way that anything is possible" she said.

And nearly 50 years later his legacy lives on.

"Regardless of what your current or a current situation is today, you can always change it. Take the ride, hang with the flow, it'll be alright" said Hughes.

Hughes did not go on to play in the NBA. He said in the '70s, he was not a good fit for the league. Hughes was an academic standout at Dunbar and Kansas State as well. 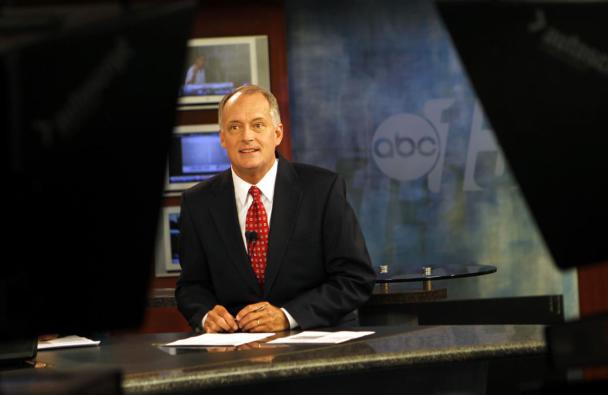 Dennis Carter, who is retiring as the sports director of WSET-TV (Channel 13) at the end of the month, has been chosen for the 2020 class of the Virginia Sports Hall of Fame.

Carter, a Virginia Tech graduate who grew up in Danville, was hired as the weekend sports anchor at WSET in 1983 and was promoted to sports director two years later.

The new class, which was announced Monday, will be inducted in April at a Virginia Beach theater.

Mickey Paige, Liberty’s first NCAA Division I football All-American, set standards at Liberty that have only been matched by a fellow Liberty Athletics Hall of Famer.

The hometown native of Lynchburg, Va., finished his four-year career as a Flame with 427 career tackles, which ranks second to 2012 Liberty Athletics Hall of Fame inductee John Sanders. The pair are the only two players in program history with 400 or more career tackles.

Paige finished the last three years of his career posting 100 or more tackles per season and set program records with 113 assisted tackles and four fumble recoveries in 1988 as a senior. His tackle total of 150 in 1987 still ranks second in school history, missing the program record by one.

Following his playing days on Liberty Mountain, Paige signed a free agent contract with the Washington Commandos of the Arena Football League in 1989 where he played for two seasons. 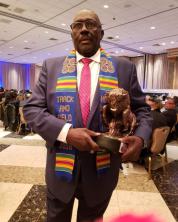 In various walks of life, we all meet people that make a difference.  These people may be our parents, family, teachers, or pillars of the community.  The best of the best are usually lauded, praised and recognized in a special manner. In the arenas of athletic competition, we adore athletes who seem to defy to do the unthinkable and make the spectacular seem ordinary.  One very special individual, who began his career in Central Virginia, maximized his God-given gifts and has achieved the highest award.  Lawrence “Deacon” Jones was recently enshrined in the Howard University Athletic Hall of Fame.

Lawrence was nicknamed "Deacon" after David "Deacon" Jones, the National Football League Hall of Famer who starred for the Los Angeles Rams.  Both of these men played with a ferocity and energy that made it a long day for opposing players and coaches.  Each man was greatly admired for their leadership, fierce fighting spirit and relentless effort.  Lawrence Jones was not only a true gridiron legend at Howard, but he also was just as successful in track and field.

The fact that Lawrence "Deacon" Jones is being enshrined in the Hall of Fame is nothing short of remarkable.  As a high school athlete for the Campbell County Wildcats, the all Negro High School in Campbell County, Jones paired up with QB Donald Preston and helped lead their team to an upset of previously unbeaten powerhouse, the Dunbar Poets.  The Wildcats would finish the season 6-1 and were dominant in all facets of the game.  In the small segregated school in Rustburg, VA, Jones led his team to the Western District Championship as a senior.  He was a force on both sides of the ball from his positions as both an offensive lineman and defensive lineman.

After completing his scholastic career, Jones enlisted in the Armed Forces.  He represented his country for 19 months and after his tenure of service, he returned to his home where a chance meeting paved the path for his introduction to Howard University.

Coach John M. Organ, who was a very successful coach and mentor at Dunbar High School met Jones in passing and struck up a conversation.  Coach Organ was familiar with Deacon from his high school accolades and began to ask what Jones was doing back in Lynchburg, Virginia.  After the conversation, Coach Organ encouraged Jones to look at enrolling in Howard University and continuing his education and playing football.

The rest as they say is history.  Deacon Jones enrolled in Howard University in 1968.  Coach Organ, who went on to coach at Howard for nearly a decade, had found a diamond in the rough that was about to make a lasting impression on the historically Black college in Washington, D.C.  Jones' impact and presence was felt immediately.  Even though he was nearly three years removed from organized football, Jones' fire and passion had never died out.  In his first year on campus, Deacon Jones was a great leader that had others looking at his play and his character. On the field, Jones was nominated for the all-CIAA team as a defensive tackle.

His freshman year was just a taste of the production and potential that was yet untapped.  As a sophomore, he continue to exemplify the true meaning of a two-way player, serving as an offensive lineman and a defensive tackle.  His true value was in his play but his biggest sacrifice was his workmanlike mentality that served him well.  Jones was the only player on the team to play on both sides of the ball and it is not lost on anyone that he did he work in the trenches, arguably the toughest area on a football field.

Jones was a physical specimen that wrecked havoc in his four years of college football.

Jones was not only a stalwart on the gridiron but he also was known to be an exceptional talent on the track and field.  As a shot put specialist, Jones was an integral part of the Howard Bison teams which captured the CIAA Track and Field title in 1969.  Jones tremendous abilities were not lost on his teammates nor on his impact on Howard University.

Upon graduation in 1972, Jones had established his legacy as a member of the Howard University Mississippi Project which was dedicated to lending a voice and resources for African Americans in the Mississippi Delta.  He spearheaded this program to branch off and establish an chapter with the District of Columbia Public Schools.  Jones also lent his time to be a role model and establish a tutorial program at Benjamin Banneker Elementary School.

Lawrence "Deacon" Jones was a pioneer, a scholar and tremendous student athlete who dedicated himself to his craft.  He did as much or more for others by his performance on the field and his contribution to society off the field.  It is a tremendous honor and well-deserved induction for Mr. Lawrence "Deacon" Jones, a small town kid from Rustburg, Virginia, that joins the pantheon of greats in the Howard University Athletic Hall of Fame.